Egan’s Irish Whiskey is a brand of true heritage that was born in the heart of Ireland.

At the turn of the 20th century P. & H. Egan Ltd was one of the most important employers in the midlands of Ireland with branch offices throughout the region. P. & H. Egan won considerable praise for its legendary Tullamore Ales and, of course, Egan’s No.8 Irish Whiskey.

Six generations in the making, this charismatic range of Irish Whiskey was carefully selected by members of the Egan family and proudly represents over 160 years of heritage.

To much acclaim, Egan’s 10 Year Old Single Malt was released in 2015. This was followed by Egan’s Vintage Grain, a single grain, more contemporary whiskey which is perfect for the casual enthusiast and great for mixing.

In 2018 we released Egan’s Fortitude, a whiskey that has been aged exclusively in PX casks and Legacy Reserve I, which is aged in ex-bourbon casks for a minimum for 15 years and limited to 1,000 bottles.

2019 saw the release of Egan’s Centenary. A release of 5995 bottles that commemorates 100 years since the passing of Henry Egan back in 1919. Egan’s Centenary is a blend of single malt and single grain that is finished in XO Cognac casks of Limousin Oak.

Egan’s Irish Whiskey were also thrilled to welcome the second installment in the Legacy Reserve series. Aged for a minimum of 16 years in ex-bourbon casks and finished in Banyuls AOC casks, like its predecessor, Egan’s Legacy Reserve II is limited to 1000 bottles. 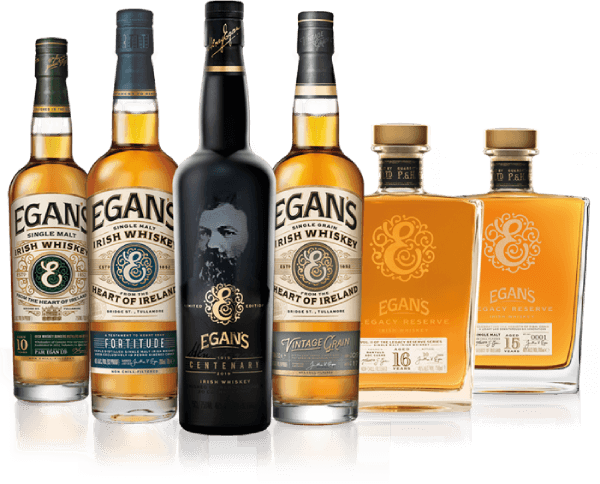